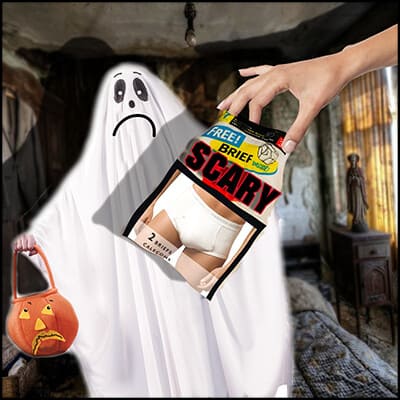 UFO sightings. Near-death experiences. Underwear mishaps. Many people have them and are too shaken up to speak openly. Especially about their underwear horror stories.

One of my nieces bravely shared her near-death underwear encounter. The underwear didn’t expire, but according to her, she almost died from embarrassment. She was young, and it’s easy to keel over from shame at age 20.

While getting dressed for work, she discovered she was out of undies so became resourceful – she pulled on bathing suit bottoms and hurried downtown. Of course, that was the same moment when a gust of wind blew up her dress and gave bystanders a generous view of her bathing suit. She was mortified and will forever remember her “Marilyn Munroe” moment.

At least she was wearing a woman’s swimsuit. And from a distance, who can discern Lycra from Spandex?

My own underwear story took place when I lived in North Vancouver. I worked downtown and used the Seabus to cross the Burrard Inlet.

Although these floating buses run every 15 minutes, daily riders develop a “personal best” mentality when it comes to catching them. The challenge is to race through the terminal and board the ferry before the gates close.

One day I forgot to set my alarm and slept in. Worse, I realized there wasn’t a single pair of panties in my drawer. No worries, I could always snipe from my husband’s stash. Not his panties, but his Joe Boxers and Stanfields.

I’d never worn men’s briefs before, except on my head for a few minutes at a Halloween party, but I was late. And desperate, so I folded and safety pinned the waistband’s elastic for a better fit.

“This is kinda nice,” I told a co-worker during the day. “Men’s gonch are comfy, with room to spare.”

Arriving at the Seabus station after work, I glanced at the clock and knew I’d have to sprint alongside a pack of transit users if I hoped to make the next bus. We were off and running.

Down to the last stretch, the safety pin holding everything in place under my skirt decided to give up the ghost. My comfy undies suddenly broke anchor and slipped to my knees. They were heading south to my ankles.

I stopped and grabbed for them, all to the curious stares of people around me, people who gave me a wide berth. Any idea how tough it is to look dignified when you’re hauling up men’s unmentionables in public?

Yes, of course I missed the Seabus, and no, I’ve never again worn men’s underwear since that experience.

At least I learned some valuable lessons – either buy more lingerie, bump up the laundry schedule, or wear pants if I’m ever brave enough to don another pair of men’s skivvies.

Since Halloween is fast approaching, I plan to be ready for every spooky party possibility. Better buy new safety pins.