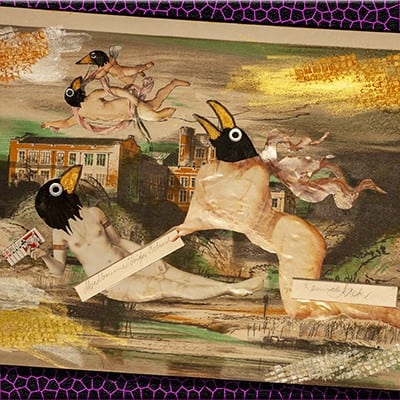 I was recently inspired by on Ohio artist I discovered online. Dave collects thrift shop paintings and alters each one with a Star Wars scene. Instead of space, the backdrop for R2-D2 is a beach; battle grounds for the Rebel Alliance and the Galactic Empire are bucolic country sides.

I wanna try that! On my first attempt to find something suitable to add my own spin, I spotted a small professionally framed piece at my own nearby thrift shop.

For a whopping four dollars, I brought the piece home where I did more examining. On the back, the title – Melbourne High School – and its painter – Kenneth Jack – were written on two small rectangles of hard paper.

After a quick online search, I learned that Kenneth Jack (1924-2006) was an Australian artist who created 100 signed prints of this school, painted in 1953.

Wow! Instead of a piece I could guiltlessly enhance (read: destroy), I snagged a signed print going for $350, and already in a quality frame!

Before removing the paper backing to examine the print, I stared at Jack’s signature and title on those two little rectangles. Then I looked more closely at the online page where I found the original photo.

“Wait a minute,” I said aloud to my husband. “Why does the writing on my frame look exactly like the artist’s handwriting? This can’t be good!”

There it was, or in this case wasn’t – the bottom of the print had been cut off to fit the frame’s mat! Those two rectangles were taken from the chopped section!

Two questions: How could anyone wreck a signed print, especially a ‘professional’ framer? And how did this almost 70-year-old Aussie print end up in a thrift store in Edmonton?

Since the print was pre-wrecked, I added my own mixed media spin of Botticelli celebrating nudes, where 1490s Italy meets 1950s Australia meets 2020 Canadian crow heads.

I present to you ‘CrowBot Jack.’

Beauty – and artistry – is in the eye of the beholder. As well as my first piece of wrecked and reimagined art, it will be my last. You’re welcome.

Coronavirus isn’t the only Grinch to steal Christmas. My brother Timothy, three years older, decided to play Scrooge and deliver the deets on Santa Claus.

Tim chose a quiet moment. We stood together on a street corner in front of our school, waiting for a break in traffic before crossing. With festive glee, Tim updated me on the truth about St. Nick and his Xmas elves.

No need to go “aww” in sympathy because I don’t recall feeling devastated.

Come on, an aging man in a red suit who visits once a year and trades cool gifts for room-temperature milk and a few Dad’s cookies? Even at age six, I sensed some implausibility. Also, I sensed that a lone worker, despite his alleged jolliness, couldn’t possibly slip down a gazillion chimneys during one night of the year.

Anyone that efficient would already be off the North Pole gig and working with Elon Musk at SpaceX.

And after a gazillion glasses of milk with an equal number of sugary cookies, we’d have one lactose-intolerant elder on our hands, complete with hyperglycemia.

As for those tireless flying reindeer, my six-year-old attitude towards anything invisible was generally, “No way, show me!” Due to my cynical roots, I refused to memorize the names of Santa’s reindeer. Donner, Blitzen, Rudolph. That’s all I got.

That cynicism included boycotting the song “Rudolph the Red-Nosed Reindeer.” When forced to sing during our school Christmas extravaganzas, I lip-synced the words. I was a prepubescent forerunner to Mariah Carey and Milli Vanilli.

My early cynicism has company – political correctness is part of this tinsel-draped picture. Retailers shiver, and not from the crisp air or Covid-19 restrictions currently placed on their stores. They’re also nervous to say “Merry Christmas” to consumers like me. Instead, many play it safe and proclaim this phase of candy canes and crèches as the “12 Days of Giving.”

Am I insulting both Christians and abbreviation-phobes alike by writing “Xmas” in my quest for brevity? Suddenly I’m as nervous as my neighborhood retailers.

Regardless of varying beliefs and traditions observed around the globe, I’ve grown to cherish the season. I’m no humbug because I’ll embrace every excuse to make merry with friends and family – when I’m legally allowed to do any embracing. Either way, I plan to reminisce about the year’s adventures and highlights. At least the highlights feel like adventures after a few cups of eggnog. Perhaps it’s the lactose talking.

I plan to cuddle up with my sweetheart to enjoy the movies that represent some of my own festive traditions – A Charlie Brown Christmas, the 1951 version of Christmas Carol and Christmas Vacation with its wacky Griswolds.

Whether you celebrate Christmas, Hanukkah, Human Rights Day, Bodhi Day, Yule or Kwanzaa, deck your halls and let the spirit of the season bring peace and generosity to your hearts and chimneys.

Turns out my darling brother has edged lower on the scale of Xmas Grinches – in 2020, Covid-19 takes the humbug fruitcake.

Hey Tim, can we talk for a minute? There’s something I’d like to share with you about the Easter Bunny. You might want something stronger than eggnog.