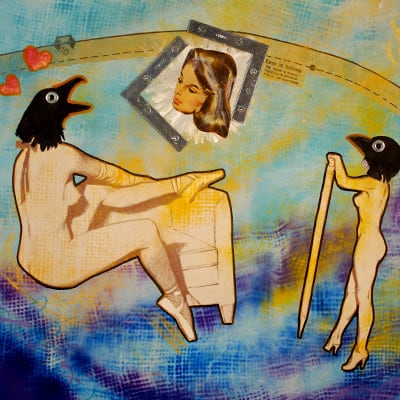 When do you consider yourself old? Do you base aging on a number? Or on how many daytimers you’ve filled with events through the years? Or do reflective surfaces have the final say?

There are other ways to remind you of the dwindling sand in your hourglass. I call them “age assisters.” My age assister caught up with me recently in the form of a teenager. She did the unthinkable: she offered me her seat on the LRT.

In theory, this gesture sounds generous and thoughtful. Her offer was the sign of a well-behaved youth, aware of the world around her and alert to more than what’s happening on her Instagram page.

After declining the offer, I thanked her, saying I’d be getting off soon.

Despite my short ride, there was plenty of time to study her flawless skin while I stood and gripped the overhead bar. There was more time still to wonder when my hair last shone like hers, without the boost from caustic chemicals and pricey products.

Then I weighed the facts: I wasn’t carrying bags of groceries and none of my limbs were bound in a cast. Here’s where things turned ugly. Instead of being thankful for her generosity, I screamed in my head, “Does she think I’m old? It’s not fair! I’m not ready!”

Sigh. “It’s official, I’m getting old,” was my next thought, with less drama. My self-assurance came to a clichéd screeching halt as quickly as my LRT ride.

But I’m over that negativity today. I’m back to my positive self with little more than an unexpected kick start.

Why such a turnaround? This morning a group of young men in their twenties drove by and whistled at me from their car, yelling a phrase that included “Hey baby!” and “nice [undecipherable body part]!” I spun around to make sure no one else was standing behind me, at least no one younger. And then I scanned my own body, in case I was dragging toilet paper on my sneaker.

Since the vehicle traveled past quickly, those young men had no idea what was beneath my ball cap and sunglasses.

But who cares? As an aging woman, I don’t mind occasional attention from strangers, even those who yell from their vehicle and confuse me with someone younger, or someone else entirely.

Today I’m fast-walking to the gym where a good workout might hold back a few of those falling sands.

Wait . . .  the gym has mirrors. Better leave my glasses at home. What I don’t see will thrill me, not kill me.