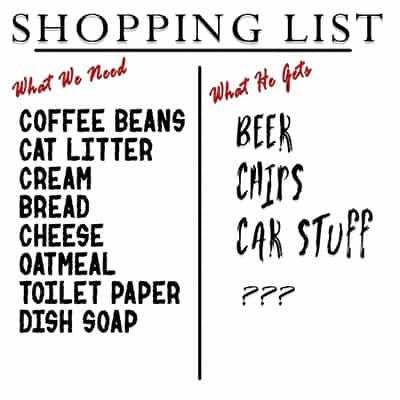 Listening is an under-rated art form. There’s a wise saying that people should listen twice as much as they talk, considering they have two ears for every mouth. When I read the report that men listen with only half their brain, my husband’s confidence improved.

“See? Paul said, pointing to an online article. “It’s not my fault, that’s the way I’m hardwired. Now when you call me a half-brain, it won’t be such an insult.”

The man has a point. I’ve been doing a non-clinical study for years and agree with the findings. Take the subject of errands. If I ask Paul to pick up a few groceries, he looks like a proud warrior when he returns with two of the four items I requested.

“Didn’t you buy coffee beans? I told you we were out and now won’t have any for breakfast tomorrow! What’s all this other stuff?” and I rummage through the bag.

“I never heard you say coffee. I got a Rolling Stone and BBQ chips.” Surprise: I don’t need B-B-Q chips, yet I do love my morning coffee.

I never confuse the topic of listening with that of memory. When it comes to memory, Paul has a great set of temporal lobes. He’ll recall something I mentioned at a party in 2006 where I commented on a woman’s pretty purple dress. From one remark, he’ll forever believe I adore purple dresses, and he’ll point out every one we walk past in store windows. Since the seed is firmly rooted, why bother arguing?

I’ve made another discovery through years of unscientific study: what men don’t hear, they invent. While on holidays, Paul led me into a restaurant that specializes in ramen soup. He ordered me a bowl and watched me eat while I commented on the soup’s poor quality and expensive price.

“Yeah, but at least we found a place that serves ramen,” he said. “I know how much you love it.”

“Since we used to eat it in Vancouver. Remember that noodle place on Robson Street? We’d always sit at the window.” He wasn’t giving up.

“Yeah, I liked the restaurant, but when did I say I loved the soup?” At some mystical juncture, Paul decided that I loved ramen. Case closed. At least he tries, even if he’s correct only half of the time.

Sometimes I wish that I could listen with only half a brain. Think how bearable it would be when the radio plays the same song six times on the hour. Or when the neighbor’s dog barks before I’m ready to get up in the morning. Or when I’m seated next to a screaming baby on a plane. There are countless advantages.

Why do I have to listen at all?  Maybe I’ll request a pack of ear plugs on Paul’s next grocery run. At this rate I’ll have a 50/50 chance of getting them.

One Reply to “Can You Hear Me Now?”