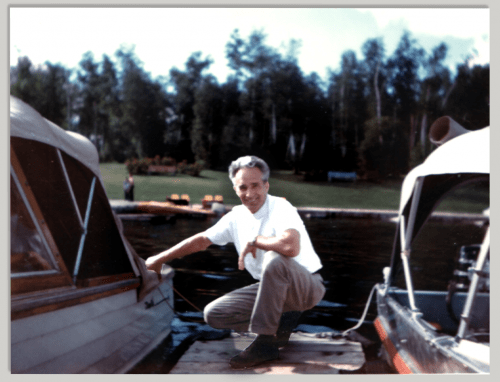 It’s that time again, the third Sunday in June when we tip our ball caps to the good fathers in our lives. I treat this day with plenty of respect, which is easy to do because I had a great dad.

Bottomless patience. That was one attribute that made him wonderful. While other dads shouted at their kids for denting cars or coming home late, my pop rarely lost his temper.

Take the time he bought a boat so we could cruise the river or enjoy a dozen rides on the lake during our weeks at a rental cottage.

Once, while my dad was tying our boat to the pier after one of those excursions, my brother dropped his glasses into the water. They quickly disappeared through the murk.

Some fathers would have yelled at their son’s carelessness. Not my dad. He donned a pair of goggles and dove once, twice, five times through gasoline rainbows until he found Randall’s horned rims on the lake bottom. That’s how Dad took care of business, without finger pointing or threatening words, and without expecting big thanks.

On another occasion it was my turn to test his endurance. I entered our teacup Chihuahua, Mini, in a local dog show. When Dad and I rolled into the parking lot, there were no cars, only a notice on the building’s door: DOG SHOW MOVED. The new address was a 45-minute drive.

On his day off – only one each week – Dad could have said, “Oh well, try again next time.” But he didn’t. We sped across town through pouring rain and hurried inside with Mini, who wasn’t overly excited about imminent fame, fortune or Best in Show.

Unfortunately, we were too late and I missed my turn in the ring. Tears streamed down my face as I stood in a crowd of milling people and their pooches. Again, my dad could have been annoyed for wasting his afternoon. All he said was, “Let’s get a hot dog from the canteen before we leave. They look like good ones.”

And that was it, all part of being a father and spending time with his children, supporting their dreams.

Remember to cherish your own dad, whether he’s near or far. To all the patient dads on Father’s Day, I raise my hot dog to you.

And for the record, Mini could have won that Best in Show trophy. At least that’s what I’ve told myself since age thirteen.