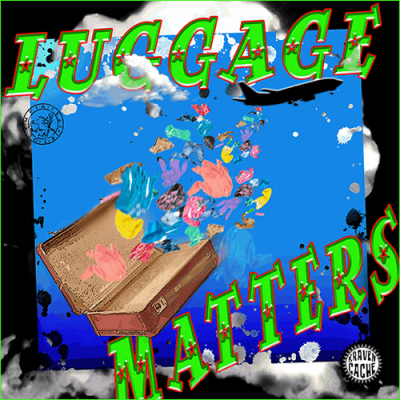 While touring Italy with my sister and a busload of keen tourists one spring, I noticed how small problems have the potential to hamper a trip. Take colds and flus. The moment I heard the first sneeze or hack of an ailing traveler, I became germ phobic, refusing to stand or sit near anyone who looked the slightest bit peaked.

I bathed myself with anti-bacterial hand cleaner at every opportunity.  Who had time to get sick and miss a moment of fabulous countryside,  famous art or delicious Italian cuisine?

As for other small problems, factor in a lost piece of luggage.

I thanked my non-superstitious stars when I saw my suitcase spit from the carousel within minutes of arriving in Rome.

To me, this was a veritable feat of engineering, considering I started my journey in Calgary, changed planes in Toronto, boarded another in Frankfurt and finally arrived at my Italian destination.

Despite the jitneys I rode and the terminals I changed in various airports, there it was – my beautiful suitcase – bumping its way along the conveyor belt. I breathed a sigh of relief. Who am I kidding, it was a gusty “Yoo hoo!” and a fist raised in victory.

On these package tours, guests are allowed to bring only one suitcase. In other words, my underwear, toiletries and comfy pillow were all riding on my bag’s prompt arrival. And since we stayed at six different hotels, it’d be no easy task for missing luggage to catch up to an owner.

I’m quick to steal titles from movies today, so call it The Incredible Journey because my loyal suitcase went the distance and met me on schedule, both of us unscathed.

No-show luggage tormented one passenger on the tour. Her partner’s luggage appeared, but her own suitcase stayed in the US, revolving aimlessly in a mystery carousel for several days. Speaking of mysteries,  it’s strange how her stylish green plaid case – one that matched her partner’s – could be left behind. Maybe the baggage handler didn’t like the color; maybe the bag was too stylish for its own good.

The other question is how it took me 20 hours to journey to Italy, but that green suitcase needed a whopping four days. Poor little luggage – it missed everything from Siena to Florence. It deserves a do-over.

If your luggage defines you, then I’m an inexpensive black number with Hello Kitty pink duct tape holding the works together.

There’s a reason I travel like a pauper with my Club Monde (perhaps a take-off on Club Monaco, to make it sound exotic). I read a warning that the more expensive your case, the greater the chance of having it stolen or pilfered. In other words, your Louis Vuitton bag undoubtedly contains a better haul than my nondescript scuffed and taped clunker.

Who’d waste their time ransacking my cheap case? If any thieves covet a $12 alarm clock or a travel pillow, then I’m their bag. But if they’re looking for pricey electronics or designer fashions, they’d be wise to  move along to the next suitcase, something with a better label.

If I learned anything from my Italian excursion, it’s that European travel separates the women from the girls. After all, multiple plane  changes  and an equal number of time zones is no picnic. Plus, schedules are guaranteed to include a mad dash for your plane in one airport  followed by a six-hour stopover in the next.

That said, the travel rewards are huge and the money well spent. Just leave your expensive luggage at home, where it’ll make a fashionable door stop.