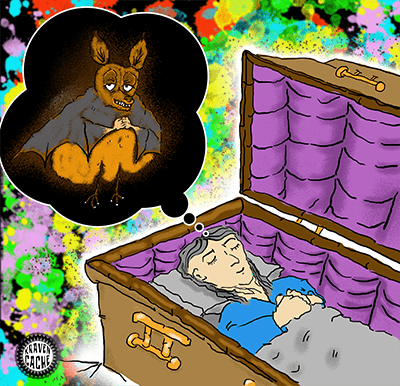 Call me weird, but sometimes I check the obituaries of cities where I’ve lived. I don’t have a morbid obsession with death. On the contrary, I’m more concerned with who’s still alive.

What fascinates me about obituaries is how lives are encapsulated and celebrated in mere paragraphs. Some folks are remembered for their song and dance, or their curling and Tai Chi. Others are recollected as feisty and humorous, or generous and patient.

One woman had an interesting 89 years. Her tribute began, “Departed this world, looking glamorous as usual.” How’s this for an active life: she was passionately interested in wildlife conservation and international travel; she went on 13 safaris and two bat expeditions in Africa; and she was part of a field research team with the Royal Ontario Museum that discovered a new species of bat in Cameroon. She even had a bat named after her.

I’m not done: she sky-dived twice in her mid-70s; survived a plane crash en route to touring Antarctica; was a loving mother and lived a fiercely independent life, touching the lives of many throughout the world with her joie de vivre and courage.

The final words from her family? Bon voyage. Wow, if I deserved a third of her tribute, my life would feel well spent.

I am touched by the importance of pets in obituaries, which shows a kindness that transcends any list of accomplishments or academic degrees.

And food is often a focal point. Both men and women are celebrated for their sweet and sour pork buttons, their teenie-weenie sandwiches or their famous fudge cakes.

These small but poignant details allow me a peek into their aromatic kitchens and into their lives.

Some obituaries are historical, describing how parents struggled to raise a family during the Great Depression, with children recalling times so grim that furniture had to be broken up for firewood. One obituary revealed how the family went on to prosper in large part due to a mother’s relentless determination.

Who needs medals and certificates of merit when you have praise from people who truly love you?

Others tell a story in few words, such as this woman’s: “Dedicated to family, her character was her own and built on many passions such as the love of fast cars, fast horses, fast dogs and, of course, hollering Bingo!”  I would have liked this woman.

The most important aspect of an obituary? Remembering our loved ones, in whatever meaningful form that takes.

Have I written my own? Nah. I’m too busy living my life. The best news from today’s obituaries? I didn’t find my name!

Go out and live a little. For that matter, live a lot!

Audio song
“All For”
by Ralph Real

4 Replies to “On Remembering You”