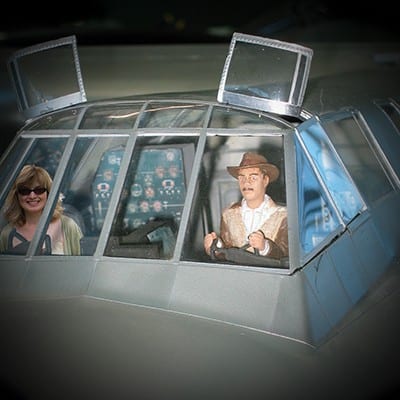 Missions. We all have them. Some of us are driven to distraction by them.

Howard Hughes is a perfect example of a man with missions. When you inherit your father’s tool company and become a millionaire at age 18, those missions go from dreams to done deals.

One of his missions was to become a movie mogul, where he enjoyed the perks of dating Hollywood stars. He was also known for inventing the first push-up bra, specially designed to lift and separate the frontal assets of Jane Russell in The Outlaw.

Movie mogul and “star support” aside, his mission during the Second World War was to create a plane that could transport troops to Britain. Since allied shipping in the Atlantic Ocean was suffering heavy losses to U-boats, an aircraft was needed to safely cross the ocean.

Although Hughes wanted to build such an aircraft, there were wartime restrictions on metals. Hughes wasn’t deterred – he owned the Hughes Aircraft company.

To skirt the metal issue, he invented a laminated wood product called Duramold that was both light-weight and strong.

His wooden plane – nicknamed the Spruce Goose – took five years and millions of dollars to complete. Finally, it lifted off from the waters of Long Beach in 1947 to make its one-minute flight for one mile. Period. We’re not talking a great return on investment.

The last ignominious scoop on Hughes was that he holed up on the top floor of a hotel. There, he bottled and saved his urine, and supposedly let his toenails grow long enough to curl under his feet until the end of his fascinating life.

Paul had his own mission: to find that Spruce Goose. A Google search pinpointed our mission to the Evergreen Aviation museum in McMinnville, Oregon. Forty-eight hours later, we hit the road.

We envisioned a scenic tour of Washington and Oregon. Instead, we were trapped on the I-5, white-knuckling our way through non-stop merging traffic. We almost rear-ended a semi-trailer that slammed on its brakes and smoked its tires.

And while the I-5 was a direct route, it was a rootin tootin rough and rutted ride. We bumped along for hours. Paul said, “I used to be a boob man . . . until I grew my own.”

“Huh?” I looked over and immediately understood. “Sorry for your jiggle, but there’s always the push-up bra.”

We arrived in McMinnville to a wonderful museum filled with planes and memorabilia, in addition to the Spruce Goose. Better yet, all of the docents were retired military people who’d flown the makes of planes within this sprawling museum.

Except for the Spruce Goose. No one could lay claim to that behemoth. It was enormous and towered over everything. Inside the aircraft, I was in the belly of a whale.

After we toured and then did our damage in the gift store, we needed re-fueling. At the café, mere feet from the Spruce Goose, I slurped my bowl of soup. There I was, within cracker-throwing distance of a plane that put Hughes on the map. It also put him in front of a US senate committee for wasting so much government money.

While the Hughes missions are over, the lust for an open road never leaves Paul.

“What’s that, honey?” I say. “We have a new mission to plan? Sure, but first take off your shoes? I wanna quick peek at your toenails.”

2 Replies to “Push-Up Bra under a Spruce Goose”