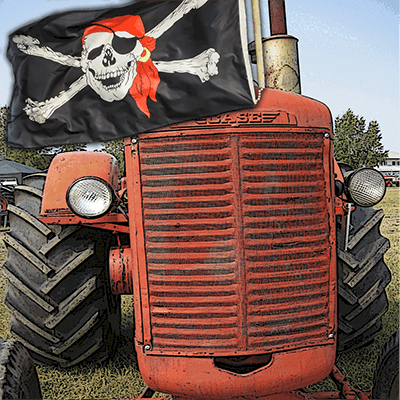 In 1978 President Jimmy Carter proclaimed the first Sunday in September after Labor Day as National Grandparents’ Day. The idea originated from a woman in West Virginia whose motivation was to persuade grandchildren to listen and learn from the wisdom of their grandparents.

This special day reminds me to appreciate my own family tree. Take my grandfather, a hard-working and good-natured farmer. He had a wooden leg, the result of a war injury. As a farmer, dealing with a missing limb must have been a daily challenge although my mother says she never heard him complain.

Today, prosthetics are made of lightweight polymer and flexible titanium capable of increasing agility and mobility. None of that innovation was available for my grandfather’s leg: his was a heavy and unwieldy contraption held in place by a bulky harness and shoulder strap. Although it had a knee hinge, the mechanism didn’t always work unless my grandpa gave it a couple of hard thumps. He told my mom that the knocks were to show it who was boss. Grandpa also swore this leg had a mind of its own.

Correction: Mom said he did complain one day when he started to limp and couldn’t put any weight on the prosthetic. Climbing in and out of his tractor produced a stabbing pain at the place his thigh joined with the artificial leg.

Sitting on the side of his bed at night, he told my grandma that he was glad the day was over, that he’d have to see a doctor about his sore leg . . . until he unstrapped the harness. Lodged in the leg’s socket was a ring of keys.

“Hey, I’ve been looking for these all day!” and he started to laugh. His pain was from several jabbing keys! It never occurred to him to take off his prosthesis and check. “Too busy,” he told Grandma, caught up in his laughter.

One of the advantages of a wooden leg, he bragged, was that it would save his life if he ever fell into deep water. His theory was tested while canoeing with a friend. When the boat capsized, the leg floated but it didn’t help my grandfather – he was trapped below the water’s surface while the leg bobbed above! The true lifesaver was his friend who dragged him to shore. Since that day, the leg became known as “Troublemaker.”

Even after Grandpa passed away, the artificial leg continued to cause trouble. My mom was enlisted to bring it home from the hospital. But what was she supposed to do with it? She decided to phone the Salvation Army and the charity agreed to pick it up. An entire week went by.

While waiting, nobody wanted Troublemaker in their bedroom (I was scared of it!) so Mom propped it inside the front hall closet behind our coats. When Grandma phoned to say she was driving in from the country for a visit, Mom called the Salvation Army again and explained the situation.

“Please,” I overheard her imploring conversation, “I don’t want my mother to see his leg, it’ll be too painful for her!” Still no truck.

An hour before my grandma arrived, a driver picked up the leg and my mom could relax.

Her relief was short-lived, however, when days later someone from The War Amps phoned to inquire about the prosthesis. He wasn’t happy to hear that she’d given it away and informed Mom that it had been “on loan” for all those years.

“If it’s not returned by the end of the month,” he said, “you’ll be charged its full price.” That leg might have been low-tech and well-used, but it was still expensive.

With a quavering voice, Mom called the Salvation Army and explained that now she needed the leg back. She had to make more inquiry calls the following week and explain the story each time. Finally, a woman answered and said, “Oh, YOU’RE the leg woman. We got it, we found your leg!”

The same driver returned to our door and plopped the limb, now missing its sock and shoe, onto our WELCOME mat.

“Hey lady,” he said. “Tell the owner to make up his mind about his body parts!” and he turned on his heel.

My grandfather would have laughed if he knew about the commotion caused by his wooden leg. “See? he’d say. “I told you Troublemaker had a mind of its own!”

7 Replies to “A Wooden Leg Does Not a Pirate Make”