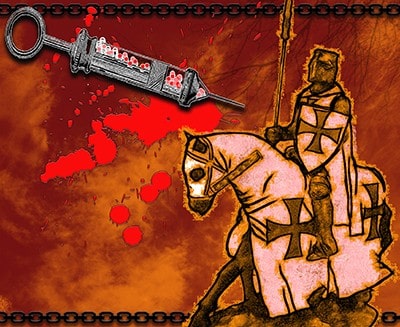 “He’s not waking, should we get him to Emerg?” a nurse asked.

He suddenly opened his eyes and yawned once, twice. “I was dreaming.”

I took hold of his hand and they worked around my kneeling form.

From the beginning of Paul’s dance with doctors, I’ve sat next to him and squeezed his hand through the pronouncement of hemochromatosis. The first doctor said his high iron level – if left untreated – will make him sicker than he already felt, possibly kill him. Her laundry list started with cirrhosis and diabetes, moved to cancer, and ended with heart failure.

Until recently, she explained, the test for serum ferritin, the protein that stores iron, wasn’t routinely done. Worse, the complaints of fatigue and joint pain were misdiagnosed.

Listening became a struggle under her florescent office lights. I thought about how life can change in a blink. Our turn.

“Is there any medication to get rid of the excess iron?” Paul asked.

“No, only weekly bloodletting for the next six to nine months–”

“Wait,” I interrupted, “bloodletting as in removing blood?” She nodded and explained the phlebotomy procedure. Visions of a medieval barber with a sharp knife and collecting bowl were close to her description: take one 16-gauge needle, pierce into crook of arm and withdraw 500-mls of crimson. Every week, a Sweeney Todd donation.

When you give blood, you’re advised to wait a couple of months between donations yet Paul would undergo two phlebotomies in six days.

Because his iron levels were dangerously high, the doctor ordered another round of tests. We returned to the hospital where I sat in the lab’s waiting room. The murmur of Paul’s voice was replaced with a woman’s call for help. I jumped up and followed a second nurse through the lab door. Paul was propped on a chair, motionless, his eyelids shut and head tilted to the side. My only question: “Did he fall and hit his head?”

“No,” the nurse said as she draped a wet cloth across his forehead and pressed another with ice cubes on the back of his neck. His usual ruddy skin was translucent.

She pointed to perspiration that beaded his knuckles. I wiped them dry with my hoody sleeve. After several decades together, I’ve never seen him so vulnerable.

When I guide myself onto the rink, hand-over-hand along the boards, I balance on razor blades, not ice skates. Paul sits behind Plexiglas and videos my inaugural skate.

Skate to center ice, I see his mouth move as I totter past, my head fighting the urge to tip backwards. He waves his free hand, wanting me to give him something video-worthy.

No way, I mouth back. Instead, I reach for a nearby skate aid that resembles a walker, a gizmo used by many of the children. Quickly, I soar between pockets of people, even if my “training wheels” are responsible for this renewed confidence. I’m careful to avoid small bodies that race past, practiced and fearless during Family Skate afternoon at our local arena.

A toddler who grips his own skate aid slides near and extends his arm. Braden is stenciled in black across the front of his white helmet. He’s trying to help me. Then I sigh and accept his mitten-covered hand. With locked hands, Braden and I make a slow loop around the rink, his father following behind.

I rue the iron that overloads his system, the “Celtic Curse” genes bequeathed by ancestors on distant battlefields of lavender darkened by bloodshed, bodies hoarding iron to live another crusade. Today Paul rides into battle with a Honda Civic, not a trusty steed. His arsenal consists of leathers and a welding stinger, not a shield and sword.

He had to sign forms that allowed our health care providers to release test results and instructions to me. Otherwise, in this movement of perceived privacy, people on the other end of the phone won’t even let me set up his appointments.

It’s not that he can’t take care of these details, but I want to be supportive. The seeds of my advocacy were planted through more bouts of unconsciousness and a weekly series of painful needles, needles that poke and mine for iron-rich treasure. Needles that can’t always withdraw enough blood but leave muddy bruises, painful for days.

I have become lead researcher, studying labels to avoid buying iron-enriched products. No easy task as every staple I reach for is heavily fortified, from cereal to bread and pasta. Sayonara to the red meat he loves, and ciao to shellfish. I read bulletin boards written by my new community of iron-overload victims.

“How do you feel?” I ask after each hospital session.

“My chest feels caved in and my back has a weird ache. It’s hard to explain.” He no longer works on phleb days. After the hospital, he eyes our couch like a welcoming pair of arms.

In the dark of night I weep into my pillow, careful not to wake Paul. I worry about him, his future health and freedoms uncertain. Other nights I feel sorry for myself, forced to shelve our plans for a warm desert getaway. In place of travel, we brace ourselves for a grey-white winter of Alberta cold and snow. “Until we get this sorted out,” I say aloud, my mantra.

After lowering his serum ferritin level, Paul should need less frequent “maintenance” sessions and lab work. More selfish thoughts circle, buzzards: no more leisurely evenings dreaming together over a bottle of red wine as the disorder makes him susceptible to cirrhosis.

Paul is more stoic. “Whadya gonna do,” and he’ll shrug. “At least I won’t die like my mom.”

Paul waves me over; we have to leave for the hospital before the lab closes. He needs blood work done again, something about a significant drop in his hemoglobin.

“Dammit, I’m just starting to get the hang of this.”

I face him through the glass. “Are you sure?” He nods. This will be the first time he’ll go on his own, whether for blood work, bloodletting or trips to specialists of hematology and gastroenterology. For ultrasounds and FibroScans.

I’ve imagined him going solo, in the event of scheduling conflicts. Cool compresses and warm blankets will envelop his fears – of needles, blood, hospitals – and a familiar face will greet him, call out, “I’m ready for you, my blood brother.” Tall and strong, he’ll walk towards that voice, that needle presented in open palms, an offering.

He leaves me on the ice, waving, and I feel unexpectedly happy, not only that I’m skating, sort of, but that he’s confident to go without me. I watch him walk through the arena door, sloughing off his own training wheels.