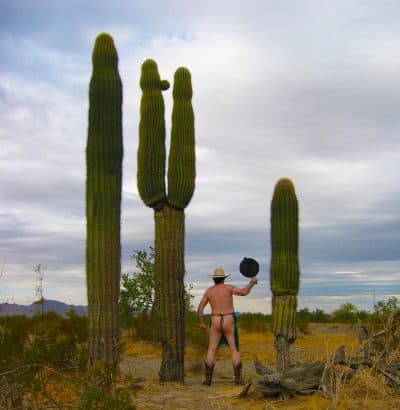 A few years ago I read how a chimpanzee named Judy escaped from her cage at the Little Rock Zoo in Arkansas. She had her chance when a keeper left the door of her sleeping quarters open. Judy’s flight to freedom wasn’t all that dramatic, considering she did little more than raid the zoo’s kitchen cupboards.

But she disappointed me during her few sweet moments of liberty. Instead of hightailing it for the open road, she picked up a toilet brush and cleaned the bowl. Then she wrung out a sponge and wiped down the front of her keeper’s fridge. Turns out Judy had been a house pet before the zoo acquired her in 1988, so scenes of housekeeping must have been the norm. If I’m ever caged and have the chance to escape, sure, I might grab a handful of cookies en route to the front door, but I won’t hang around to finish any domestic duties.

I equate travel to escaping the self-made cages of everyday life. When traveling, I’m forced to leave my comfort zones, those familiar places that feel safe yet don’t offer much variety. When my trip is over and I’m back to the usual schedules and humdrum routines, at least I can enjoy the videos I’ve taken, the photos I’ve snapped.

My husband’s favorite shot from a road trip isn’t captured on an SD card but chiseled in his memory. The image he savors is from Arizona. The location is nothing as impressive as the red rocks of Sedona or the golf courses of Scottsdale.

Instead, it’s one where he waits for me in a grocery store parking lot. We’ve stopped at a little town and I’ve run in to pick up some snacks before we park our trailer for the night. When I exit the store he watches me grin as I walk across the lot towards our truck. I grin because the check-out line is mercifully short and the beverages are pleasingly cold.

He grins at the sight of my new cowboy hat and boots, tight jeans, and the 12-pack of Miller Lite I carry under each arm. I also carry a few bags of snacks. My husband won’t recall the snacks. Not when a woman featuring tight jeans and 24 cans of cold beer is bearing down on him.

As I spot his happy expression, what goes through my mind is, “Travel is really healthy for a relationship.”

Turns out my husband is thinking the same thing, in his own male format: “Shannon should forget to wear her bra more often!” There it was. We were on slightly different sides of the psychological fence, yet we were both happy. For him, all it took was a dusty parking lot and the sight of me holding beer. And the no-bra factor.

I have my own favorite snapshot, make that two, from the photo album. The first is one of my husband standing in the desert between two gnarly cacti.  He’s also wearing his new cowboy hat and boots. A few props are added to the arsenal – a frying pan he wields above his head like a weapon and a green chef’s apron. The next picture shows him in the identical pose, except I’ve walked around to the back of the cacti to take a rear shot.

Did I mention my husband wasn’t wearing anything besides his hat, boots and apron?

Unlike Judy the chimp who was returned to her cage after a dose of sedatives, I don’t need caging or sedatives for an excuse to avoid housework. Testimony is the inside of our microwave. It resembles an execution-style crime scene. And when I reached for the TV remote from our bed’s headboard last night, my hand came away gray with dust.

I wonder what Judy’s doing this weekend. Our place could use a good cleaning. I’ll even throw in some lite beer and snacks.