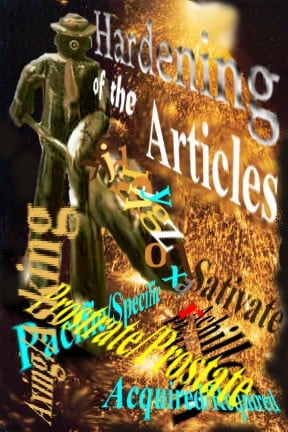 The English language gets pretty much taken for granted until I hear the word “sativate” used twice within thirty seconds.

“When he walked through the chocolate factory he sativated. The smell of all that chocolate had him sativating.” This from a fifty-year-old businesswoman, one responsible for writing reports and signing contracts. She went on to say that her arc-hilles heel was sore and that the doctor was “pacific in his instructions for me to stay off my feet.” Perhaps I should have corrected her but I figured she’s managed to survive this long mispronouncing ordinary words, and her mangling of the language intrigued me.

Days later I phoned an old friend in the prairies, one I hadn’t spoken to for years. Her first words were, “I can’t believe you called, I was just axing Kerry about you.”

I can live with all of this, experiencing little more than an involuntary grimace when it’s from an adult with English as a first language. But if you’re within punching range, don’t even think about using a double negative.

While I’m no Harvard grad, I did stay awake long enough to learn the fundamentals of grammar, and at least a modicum of pronunciation. If I’m lucky, a well-balanced diet of reading should stave off any “hardening of the articles.”

But language confusion is forgivable in the young, even comical. Take my cousin who argued with her grade seven teacher that plunish indeed was a word. “‘He was plunished for his crime and went to jail.’ What’s wrong with that?”

And then there’s yours truly. I spent all of grade six blanching every time the teacher announced an administration day. Funny, I scanned the room but nobody flinched. I’d recently begun to “administrate” along with most of my female classmates, and was surprised when none of them reacted to such a personal word.

Correction, I must have snoozed through a few of my English classes because I still avoid the mention of prostrate and prostate in conversation. And when I write, all of my characters stand, recline, or stretch out across the couch because I never remember the simple rules for lay and lie. (Nor, for that matter, would you find them prostrate/prostate.)

I have to go now. Paul wants me to come grocery shopping with him.

“We’ve never got nothing to eat in this house,” he yells from the kitchen, making the skin on my neck ripple. But I don’t mind leaving my keyboard, because just the thought of those candy aisles makes me sativate.