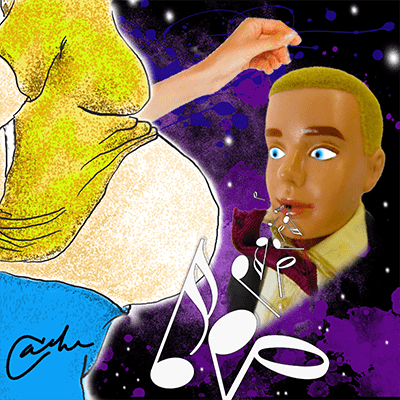 My husband has begun an annoying habit while we relax in bed: he plays with my stomach as if it’s bread dough.

“Stop it!” I yell and slap at his pawing hand. ”This isn’t Silly Putty!”

Although I’ve never been pregnant, I can empathize when people reach out to rub a woman’s  rotund stomach. Those people envision a beautiful growing baby and are drawn to it, the same way they’re attracted to a puppy or kitten.

Conversely, those pregnant women see a groping hand reaching towards them and they’ve never felt so territorial.

My hand trembles with desire to sweep my palm across all that fuzz. Now it’s tough to concentrate on what the guy is saying. Downy. Alluring. Must touch.

There’s nothing sexual about it. If anything, my psyche is probably reconnecting with my youth where I played with my Ken doll, the kind with the peach-fuzz head. Sure, Barbie had great golden locks, but Ken’s head was something special.

Let’s shelve my downy head hang-up and get back to pregnant women. Lately great emphasis is placed on the prenatal experience. Parents don’t simply talk to their unborn babies but also read to them and play selected music.

Embryologists say that the ear is the first organ to develop, that it becomes functional after only eighteen weeks and baby listens actively from twenty-four weeks on.Speaking, reading and singing to a baby before birth is said to enhance its ability to distinguish sounds after birth. Some scientists believe that babies understand what’s being said around them.

I find that hard to believe. If babies understand from an early age, why is it such a struggle to toilet train them or teach them why they can’t throw Daddy’s keys into the toilet? For keys, they have no problem with the flush.

If you have extra time in your busy day, why not buy a device that allows you to hear, record and e-mail your unborn baby’s heartbeat and hiccups.

Here’s one ad I found online: “Listen to these sounds with the baby’s father, siblings or friends. You will also hear the nutrients passing through the placenta.”

I wouldn’t be too keen to share sounds from my placenta; once that child is born, we’ll be treated to enough sounds. My device of choice would be ear plugs.

My own mother was busy with four children before I arrived. Little concern went towards my in utero experience. I’m thankful enough that Mom didn’t smoke, slam shooters or play with hallucinogens while she was pregnant.

As for my non-pregnant pooch, I’ve created a new rule in our household: I’ll let my sweetheart squeeze my belly if he shaves his head and lets me stroke his fuzz. Now that’ll be a Friday night tale to tell the non-kids.